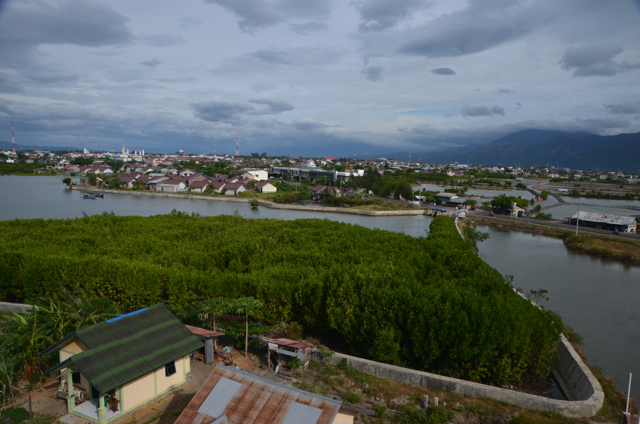 View of Banda Aceh from tsunami evacuation tower, built on the coast after the 2004 earthquake off Sumatra in Indonesia, which sits on the Ring of Fire, a region prone to eruptions and earthquakes (Simon Roughneen)

DUBLIN — It was the world’s biggest volcanic blast for at least the last 2 million years, but when Mount Toba in Indonesia exploded around 74,000 years ago, humans were not as badly affected as previously thought, according to research published by the National Academy of Sciences (NAS) in the US.

While the blast “likely caused severe global climate disruption,” early humans “were sheltered from the worst effects,” according to the NAS study.

Overall, the scientists said, “the impacts [of the eruption] on climate and human evolution remain unclear.”

Other scientists have in the past blamed Toba for causing a decade-long volcanic winter, leading to a millennium of global cooling and then an ice age.

Some researchers have fingered the eruption for reducing the world’s human population to below 10,000, while some also have said the apparently simultaneous worldwide population plunge was not caused by Toba.

Near-extinction event or not, the Toba eruption dwarfed that of another Indonesian volcano, Tambora, which was heard 2,000 kilometres away when it erupted in 1815 and caused famines across Europe during the following “year without a summer.”

Research published by the NAS in 2013 showed ash from Toba falling as far away as Malawi. Parts of India were covered in 15 centimetres of ash from the volcano, the caldera of which now holds the 100-kilometre-long Lake Toba, a popular tourist draw in the north of Sumatra.

The Toba cataclysm was the last time one of the world’s handful of so-called supervolcanoes blew. Scientists said in 2001 that such an eruption at another, under Yellowstone Park, could cover half the US in up to 1 metre of ash.