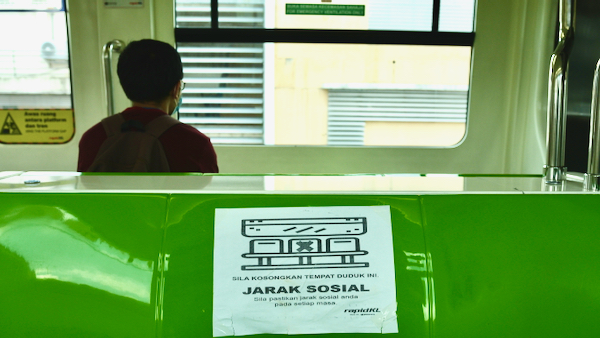 Social distancing in May 2020 on a city train in Kuala Lumpur, Malaysia, a major manufacturer of electronics and related parts (Simon Roughneen)

DUBLIN — Ford’s Cologne factory is to pause production of Fiesta models due to a shortage of semiconductors usually sourced from Malaysian factories, which have been hit hard by the coronavirus pandemic and related government restrictions.
The shutdown is to begin on Thursday and last at least two weeks, the company said on Wednesday, and comes as factories around the world are being hit with shortages of computer chips and other components due to manufacturing supply chains being stretched by to pandemic rules.
Toyota and Volkswagen are among the other car brands to recently warn of slowing production due to tightening supplies of chips.
According to Capital Economics, with “virus disruption” likely to last “at least the next couple of months,” the global shortage of chips is “unlikely to get better any time soon.”
Capital was reacting to Wednesday’s survey results showing manufacturing across much of Southeast Asia, including Malaysia, as having “remained in a downturn during August.”
The monthly Purchasing Managers’ Index (PMI) “remained firmly in contraction territory” at 44.5 due to “rising Covid-19 cases and lockdown measures,” according to publisher IHS Markit, which polled around 2,100 factories.
August was the third consecutive month that the index for the region, a major production zone for cars, clothes, computers – as well as electronics and related components such as chips or semiconductors – was below 50, which means a slowdown.
“The fastest rates of decline were recorded in Myanmar, Vietnam and Malaysia,” said IHS Markit economist Lewis Cooper.
Although Malaysia has been in lockdown since May, virus-related deaths have surged in the meantime and case numbers have jumped five-fold, with the crisis leading to Muhyiddin Yassin being replaced as prime minister last month by Ismail Sabri Yaakob.
Malaysia’s economy was however given a much-needed boost this week by the announcement by German sports car brand Porsche that it would open its first non-European factory in the country next year.
Elsewhere in the region, Myanmar’s reading of around 36 was “the lowest on record,” IHS reported on Wednesday. The country has been beset by unrest and strikes since the army seized power in February, which IHS’ Shreeya Patel said was “weighing heavily” on businesses.
Though a decline was recorded in the region’s wealthiest country, Singapore, also a major exporter of computer parts and electronics, economists surveyed by the city-state’s central bank said they expected gross domestic product to expand by 6.6 per cent this year.
Show
Follow us on TwitterFollow @Arevico
Share