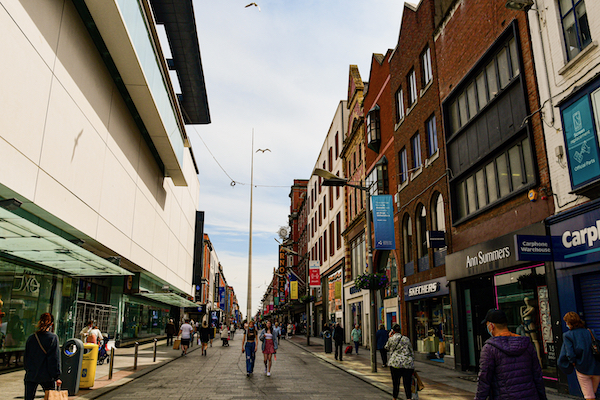 The centre of Dublin, the capital of Ireland, the world’s 8th biggest recipient of foreign investment in 2020 (Simon Roughneen)

DUBLIN — Foreign direct investment should revive in 2021, the United Nations Conference on Trade and Development (UNCTAD) said on Monday, after a 35 per cent global drop last year when lockdowns “slowed down existing investment projects,”
According to UNCTAD’s World Investment Report 2021, global investment should “recover some lost ground” by growing 10-15 per cent, as multinational enterprises resume work paused due to “prospects of a recession” last year.
The global economy shrank by over three per cent in 2020 but is expected to rebound this year with 5-6 per cent growth, according to recent World Bank and OECD estimates.
Though overseas investment is expected to bounce back in tandem with GDP expansion, it will remain 25 per cent below 2019 levels after a tough 2020, according to Unctad’s James Zhang.
Investment into “developed” economies fell by 58 per cent to 312 billion dollars, the lowest since 2003, with Europe getting 80 per cent less than in 2019. The US received the most foreign investment of any country, even after a 40 per cent drop.
“Developing Asia” was the only region to report growth and was source and destination of “more than half of global inward and outward FDI flows,” with China, Hong Kong, Singapore and India the world’s four biggest recipients after the US.
FDI into China grew 6 per cent due to its “rapid GDP growth recovery,” while Singapore’s 91-billion-dollar influx was more than quadruple that of Indonesia, South-East Asia’s second-biggest recipient, and almost three times as much as the world’s 83 “structurally weak, vulnerable and small economies” combined.
Show
Follow us on TwitterFollow @Arevico
Share