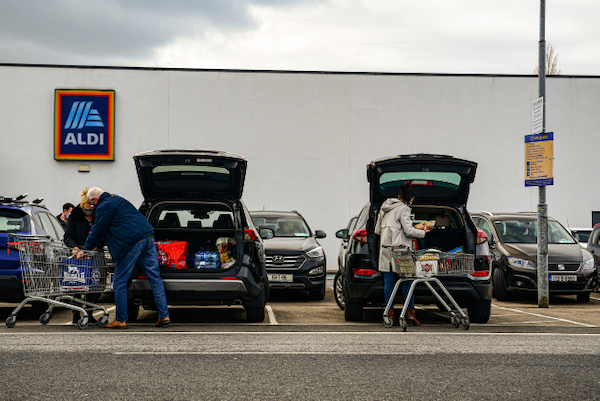 Shoppers in the west of Ireland loading their cars outside a supermarket. one of the handful of retailers allowed to stay open during Ireland’s lockdowns (Simon Roughneen)

DUBLIN — Coronavirus-related borrowing and spending caused an 18.4-billion-euro (22.01-billion-dollar) government deficit in Ireland last year, equivalent to around 5 per cent of gross domestic product (GDP), according to official data published on Wednesday.

The Central Statistics Office (CSO) said Dublin borrowed almost 14 billion euros to meet ballooning health and social costs incurred by pandemic restrictions, which have left hundreds of thousands of people out of work and dependent on state support.

In 2019, the government reported a surplus of 1.9 billion euros, before a swing into the red of of more than 20 billion last year – even as GDP grew by 3.4 per cent due to surging exports in multinationals-dominated sectors such as pharmaceuticals and information technology.

“The effect of Covid-19 on government finances,” said the CSO’s Tom Fitzgerald, has been “both the drop in government revenues and the increase in expenditures.”

The tax take fell by 2.5 billion euros while spending jumped by around 17 billion to 104 billion – money Fitzgerald said was pumped into subsidies for shuttered businesses and laid-off workers.

Unemployment soared to a record 28 per cent during Ireland’s first lockdown last year. A mid-2020 recovery was torpedoed by a third lockdown imposed in late December, which saw joblessness soar back up to around 25 per cent.

While restrictions were eased slightly this month, businesses such as restaurants, pubs, gyms, hairdressers and “non-essential” retailers – including clothes and shoe shops – were told not to reopen.