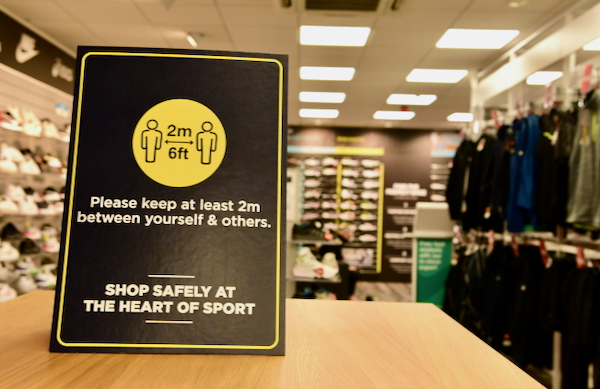 Retaliers deemed ‘non essential’ such as this sports shop, were not permitted to open during Ireland’s pandemic lockdowns (Simon Roughneen)

DUBLIN — Ireland’s gross domestic product grew by 7.8 per cent in the first quarter of the year due to surging exports by multinational corporations, according to official estimates.

However, gross national product, a measurement which cuts out multinationals, fell by 1 per cent quarter-on-quarter, the government’s Central Statistics Office (CSO) said on Friday.

According to the CSO’s Jennifer Banim, “the tightening of Covid-19 related restrictions led to lower levels of economic activity for many of the sectors focused on the domestic market.”

Ireland’s government lifted a third pandemic lockdown in May after almost five months of restrictions that were ranked among Europe’s harshest by the University of Oxford.

The government this week extended until November the emergency powers under which the restrictions have been imposed.

But domestic businesses are already reviving after the end of the latest lockdown, according to the IHS Markit/Allied Irish Banks (AIB) May Purchasing Managers Index (PMI).

AIB said on Thursday that “pent-up demand was released with the loosening” in May. A manufacturing PMI released earlier this week reported a similar rebound.

Although Ireland’s GDP grew by 3.4 per cent in 2020, “almost a quarter of [SME] respondents saw turnover fall by more than half in the year,” said CSO statistician Sorcha O’Callaghan.

Four in 10 SMEs told the CSO they have had to close multiple times since March 2020, and some, such as pubs, have not yet been allowed to reopen.