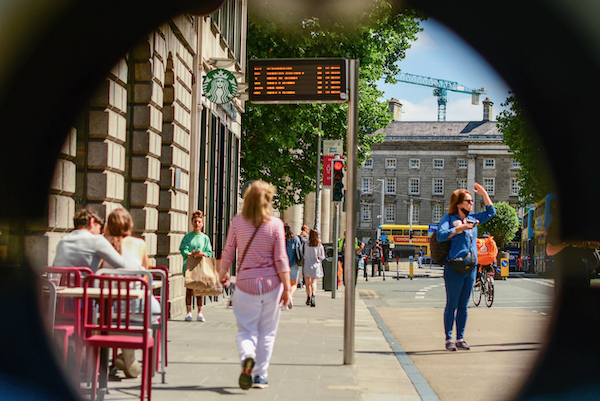 Bus stop outside a Dublin café in July (Simon Roughneen)

Unemployment across the Organisation for Economic Co-operation and Development (OECD) fell for the third consecutive month in July, the group’s Paris-based secretariat said on Thursday.

As countries continued to mostly ease coronavirus pandemic restrictions, joblessness dropped by 0.2 per cent to 6.2 per cent of the OECD-area workforce.

However, unemployment remained almost 1 per cent above the 5.27 per cent recorded in February last year, the month before the World Health Organizaton declared a pandemic and most countries imposed lockdowns that froze swathes of their economies.

The euro area registered a 0.2 per cent fall to 7.6 per cent in July, while more up-to-date data for the US showed unemployment down to 5.2 per cent in August.

Of the more than 30 countries covered in the report, Japan and the Czech Republic recorded the lowest unemployment levels, at 2.8 per cent, while Greece and Spain had the highest, at over 14 per cent.

The data do not reflect numbers of people furloughed due to pandemic restrictions or receiving temporary state payments in lieu of wages.

The wider unemployment numbers appear roughly in line with the bloc’s economic revival, with gross domestic product growth “accelerating,”  though GDP remains 0.7 per cent below the late 2019 level, the OECD said last month.