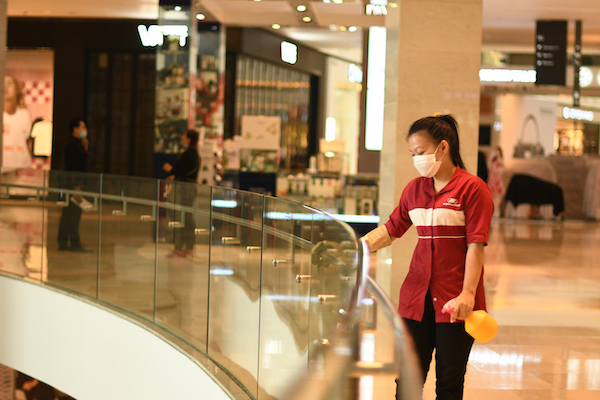 At work in a mall in Kuala Lumpur, Malaysia, a so-called middle-income economy, shortly after the relaxing of the county’s first pandemic lockdown in May 2020 (Simon Roughneen)

DUBLIN — More than half the world’s people lack “social protection coverage” and have been left wide open to “economic shock waves” since the start of the coronavirus pandemic, according to the International Labour Organization (ILO).

The ILO, a United Nations body, said in its World Social Protection Report 2020-22 that the pandemic has shown up how billions of people are vulnerable to “high levels of economic insecurity, persistent poverty, rising inequality, extensive informality and a fragile social contract.”
While most Western countries and others such as Japan and Singapore “marshalled social protection as a front-line response to protect people’s health, jobs and incomes” as the pandemic spread and related curbs on economic activity were imposed, many low and middle income countries have struggled to emulate wealthier counterparts.
According to the ILO, only 47 per cent of the global population was “effectively covered by at least one social protection benefit” in 2020, leaving over 4 billion others “wholly unprotected.”
Only 20 per cent of jobless people worldwide actually get unemployment benefits, the ILO said.
Governments in low and middle income countries would need to spend around 1.3 trillion dollars collectively, roughly equivalent to Spain’s gross domestic product, to “guarantee at least a basic level of social security,” the ILO estimated.
The likes of the World Bank and International Monetary Fund have warned of an “uneven” and “divergent” global economic recovery this year, with wealthier countries getting back to normal faster than poorer counterparts, who are at risk, the ILO said, of “a reversal of their recent development gains.”
Show
Follow us on TwitterFollow @Arevico
Share