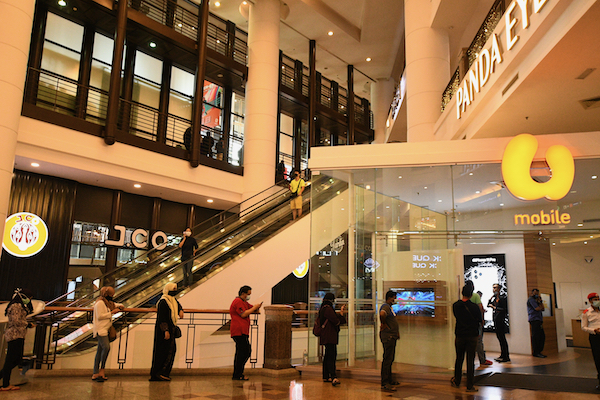 Customers lining up at a mobile phone shop inside a Kuala Lumpur mall on May 4 2020, the day Malaysia’s first Covid lockdown ended (Simon Roughneen)

DUBLIN — Global trade shrank by 9 per cent in 2020 despite a late-year recovery in East Asia, according to estimates published on Wednesday by the United Nations Conference on Trade and Development (UNCTAD).

The revival as “uneven,” with 8-per-cent fourth quarter growth in global merchandise or goods trade but stagnation in services, UNCTAD said.

While international commerce was “greatly affected” by “economic and social disruptions brought about by Covid-19,” East Asia registered “gains in global market share” after being able to “better weather the challenges of the pandemic,” according to the UN trade body.

Asian countries have for the most part imposed tighter border restrictions than counterparts in Europe and North America but have in general reopened domestically to greater degrees, with many Western governments forced to reimpose second and third lockdowns in late 2020.

The fourth quarter saw goods exports in China, where the novel coronavirus pandemic originated, up 17 per cent, with Japan registering 3-per-cent and South Korea 4-per-cent gains. Smaller Asian economies such as Malaysia, Thailand and Vietnam saw gains in sectors such as communications equipment and apparel.

UNCTAD said that while goods trade grew throughout the second half of 2020, services trade continued “to lag substantially” due to “continued disruptions” in travel.

Global goods trade fell by 6 per cent overall in 2020, a sharp decline that was nonetheless 10.5 percentage points better than the services collapse.

During the final quarter, as winter waves of coronavirus infection swept Europe and North America, prompting further restrictions, US services exports fell by 26 per cent and the European Union’s by 14, while China’s grew by 2 per cent.

Goods exports from the US fell by 5 per cent, though the EU registered 3-per-cent growth, in part due to increased demand for pharmaceuticals.

EU gross domestic product shrank by 6.8 per cent in 2020, according to Eurostat estimates published last week, almost twice the contraction reported by the US.

China’s economy grew by 2.3 per cent last year, with a 6.5-per-cent final quarter expansion helping to offset losses incurred during the early stages of the pandemic.