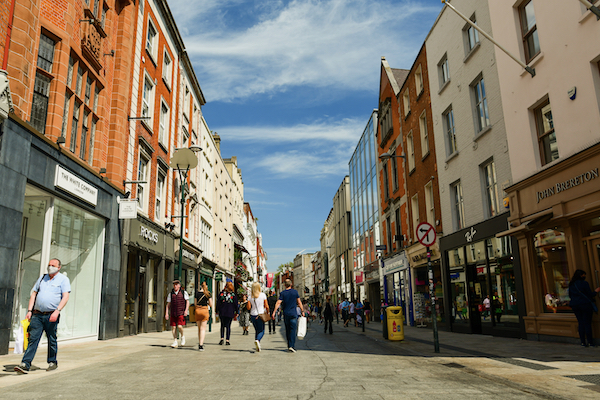 Pedestrians seen on Grafton St., one of Dublin’s main shopping avenues, in late May 2021. Ireland’s economy was one of the few to grow last year (Simon Roughneen)

DUBLIN — The global economy should expand by 5.6 per cent this year but developing countries will struggle to keep up due to “the pandemic’s lasting effects,” the World Bank said on Tuesday.

While such growth would be “the fastest post-recession pace in 80 years,” overall global output could remain 2 per cent less than if the pandemic had not happened and the ensuing restrictions on business were not imposed, the bank estimated.

While pent up demand could result in wealthy, large economies such as the US and China growing by 6.8 per cent and 8.5 per cent respectively, smaller and poorer nations will have to wait until next year to recover per capita income losses, the bank warned, meaning global growth will be “uneven.”

Per capita incomes in many emerging market economies are expected “to remain below pre-pandemic levels,” the bank cautioned, which would likely “worsen deprivations associated with health, education and living standards.”

“Among low-income economies, where vaccination has lagged, the effects of the pandemic have reversed poverty reduction gains,” the bank said, with soaring food prices hitting low-income regions hard.

The bank’s forecasts echo those made last week by the Paris-based Organisation for Economic Co-operation and Development (OECD), which said the world economy should grow by 5.8 per cent this year, expansion it also warned would be “uneven” as developing economies struggle to shrug off the pandemic.

“Recovery in many countries is being held back by a resurgence of Covid-19 cases,” the World Bank said on Monday, as well as “the withdrawal of policy support in some instances.”