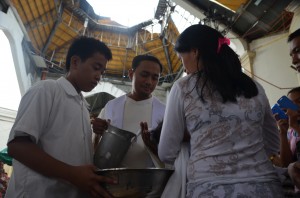 MANILA — Prison inmates in the Philippines got a taste of life outside of jail today, when in a landmark event for the Southeast Asian island nation, prisoners voted in the country’s national elections. Final results for the overall election are still forthcoming, but unofficial tallies of 57 percent of votes cast showed presidental favorite Beningo “Noynoy” Aquino well in front with 40.6 percent, ahead of former President Joseph Estrada in second place. First up to cast her ballot this morning at Makati City Jail in Manila was a 27-year-old who gave her name as Janet. Appearing non-plussed, she told GlobalPost that her voting experience “felt OK.” “I knew who I wanted to vote for, so it was no big deal,” she said.