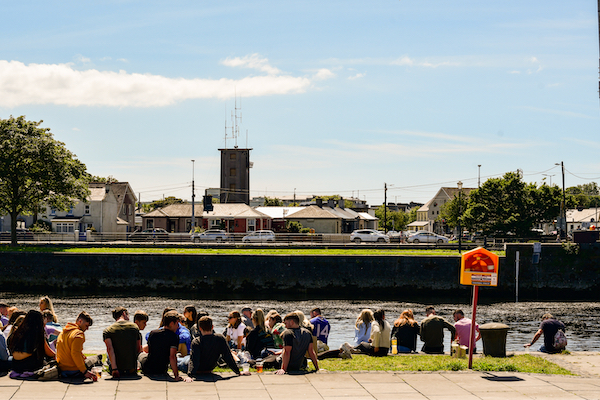 Some people predicted a baby boom due to pandemic restrictions forcing the closure of many social spaces such as pubs and cafés, leaving young people, such as these in Galway in Ireland in June, to socialise outdoors (Simon Roughneen)

DUBLIN — Birth rates have fallen by almost 10 per cent in some wealthy countries since the start of the coronavirus pandemic, according to research published by the Proceedings of the National Academy of Sciences in the US.

Using monthly live birth numbers from 2016 to March this year, the researchers reported “preliminary evidence” showing the pandemic has “decreased fertility” in all but 4 of 22 “high income countries” studied.

The authors, from the University of Oxford, Cornell University and Universita Commerciale Luigi Bocconi in Milan, factored in seasonality and long term trends, but nonetheless estimated a 9.4 per cent fall in Italy and more than 8 per cent in Hungary and Spain.

“Belgium, Austria, and Singapore also showed a significant decline in crude birth rates,” they said, acknowledging as “received wisdom” the view that pandemics mean fewer babies, with the US being hit by a 13 per cent drop after the Spanish Flu a century ago.

There were expectations in some quarters that this pandemic could lead to a baby boom – even in the 22 countries studied, most of which have for decades been reporting low birth rates and ageing populations.

A bump in birth rates was expected as a reaction to the to work-from-home directives issued by governments and the closing for long stretches of cinemas, pubs and restaurants.

However a 2020 survey by Italian academics of 18-24 year olds in Britain, France, Germany, Italy and Spain found “fertility plans” being “negatively revised in all countries.”

Official US data published in May this year showed births down around 6 per cent in December 2020 compared to one year before and 9 months on from the World Health Organization declaring a pandemic.