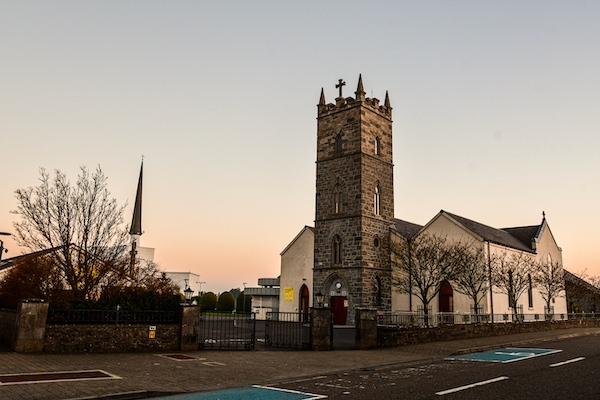 Catholic churches in the pilgrimage town of Knock in March 2021. Mass has not been celebrated in public in Ireland since late 2020 (Simon Roughneen)

DUBLIN — Ireland will end one of Europe’s longest and strictest pandemic lockdowns next month by accelerating a phased relaxation plan to allow restaurants and pubs to reopen sooner than expected and public religious services to resume.

Foreign Minister Simon Coveney told broadcaster Newstalk on Thursday that “from the 10th of May there will be changes in restrictions, quite significant ones.”

Services such as hairdressers and “non-essential” retailers are expected to get the green light to reopen, with a ban on and related criminalisation of attending religious services expected to be lifted at the same time. The capacity limit on public transport is to be doubled from the current 25 per cent.

Outdoor service at pubs and restaurants could resume in June, according to media reports that a revised reopening plan would be announced on Thursday – accounts Coveney said were “quite accurate.”

Ireland imposed a third lockdown in December, closing most retailers and forcing people to stay within 5 kilometres of their homes, unless travelling for “essential” purposes.

The measures, which have been criticised by Ireland’s official human rights commission for having “blurred the boundary between legal requirements and public health guidance,” were slightly eased earlier this month, They nonetheless vie with Italy’s as Europe’s second-most restrictive after Greece’s, going by a University of Oxford database.

Outside multinationals-dominated exporting sectors such as pharmaceuticals and technology, which have thrived throughout the pandemic, the economic impact of the restrictions has been severe. Unemployment lingered around 25 per cent in early 2021 while business has brought to a standstill in sectors such as tourism and hospitality, with some pubs closed since March last year.

Dublin Airport Authority said on Thursday that 2020 traffic dropped by almost 80 per cent to numbers not seen since 1994, while the Central Statistics Office said that though arrivals into Ireland increased slightly in March, they were at about 10 per cent of pre-pandemic numbers.