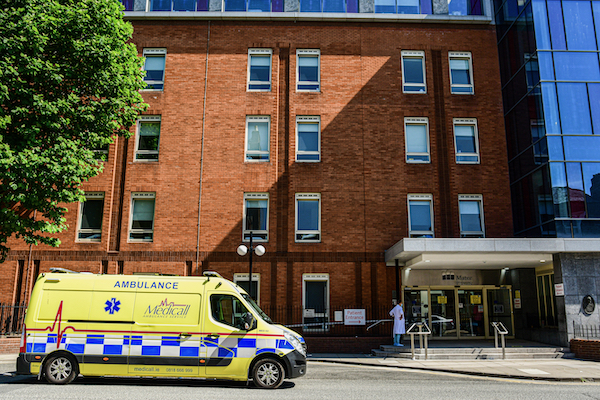 Outside a Dublin hospital (Simon Roighneen)

DUBLIN — Coronavirus antibodies persist for “at least” nine months after a person was infected, according to Imperial College London and the University of Padua, who tested patients in northern Italy, one of the hardest hit regions at the outset of the pandemic.
Antibody levels “remain high” whether or not the person showed symptoms of Covid-19, the disease sometimes caused by the virus, the researchers found.
“The great majority of SARS-CoV-2 (coronavirus) infections, irrespective of symptom onset, develop antibodies,” according to the research, which was published on Monday in the journal Nature Communications.
Around 3,000 residents of Vo – a northern Italian town sealed off by the Italian army in early 2020 after some of Europe’s first local virus transmissions were found – were tested for antibodies in May and November.
By late last year “detectable levels of antibodies” remained in 98.8 per cent of people who caught the virus the previous February or March.
The team’s tests suggested a one-in-four probability of infections being spread within households and that around 80 per cent of transmissions could be traced to just 20 per cent of infections.
While the data could have wider implications, more work is needed, according to Imperial College London’s Ilaria Dorigatti, who cautioned against “comparing estimates of infection levels in a population obtained in different parts of the world with different tests and at different times.”
But in Vo the team said they detected cases of antibody levels increasing, suggesting “potential re-infections” or a possible “boost to the immune system.”
Enrico Lavezzo of the University of Padua said “need to continue to monitor antibody persistence for longer time spans.”
Most estimates, including by manufacturers, suggest coronavirus vaccines give at least six to eight months immunity against older variants, though Washington University research published last month by Nature suggested immunity could be “lasting,” depending on the jab used.
Studies published earlier this year, including by the University of Oxford and the journal Nature, said that infection-derived immunity likely lasts longer than that from a vaccine.
Israel and the UK have reported large numbers of “fully vaccinated” people being infected with the virus in recent weeks, including Sajid Javid, Britain’s health minister.
While numbers of seriously-ill are much lower than during earlier phases of the pandemic, between 20 and 40 per cent of current virus-related hospitalisations in Ireland and Britain had been fully vaccinated.
Show
Follow us on TwitterFollow @Arevico
Share