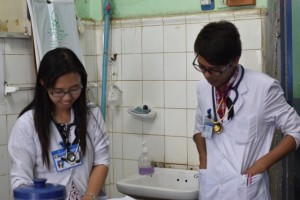 TAUNGGYI — When Myanmar’s government on Aug. 10 issued a directive for a handful of military medical personnel to be posted to the country’s public hospitals, civilian medics were quick to react. Within three days, a Facebook page full of photos of doctors and nurses in hospitals across Myanmar — all with black ribbons fastened to their white coats to protest the move — had gained over 40,000 followers. “Most of the serving doctors and staff here are wearing the black ribbons,” said Htar Htar Nyein, a surgeon at the main hospital, a five-minute walk from the military’s eastern command here in the Shan state capital. Issued three months ahead of what is being billed as Myanmar’s first free and fair elections in 25 years, the surprise directive was a reminder of the military-dominated past.