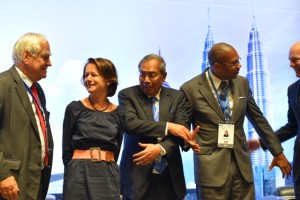 PUTRAJAYA, Malaysia — In the end, it was left to former anti-graft activist Paul Low Seng Kuan to explain why Prime Minister Najib Razak, his current boss, was a no-show at a major anti-corruption conference organized by watchdog group Transparency International and co-hosted by the Malaysian government. Low, the former president of Transparency International in Malaysia and now the cabinet minister responsible for government integrity, claimed it was he who advised Najib to skip the International Anti-Corruption Conference, held in Putrajaya, near Kuala Lumpur, on Sept. 2-4. Responding to a question from the Nikkei Asian Review during the conference, Low said he advised Najib that the audience might prove “hostile … in view of the circumstances and some of the issues that are presently happening and involving him personally.”